The curtain comes down on another Bosco Cup!

3 May,2019
The curtain comes down on another Bosco Cup!
-Mr. Barrington Serrao 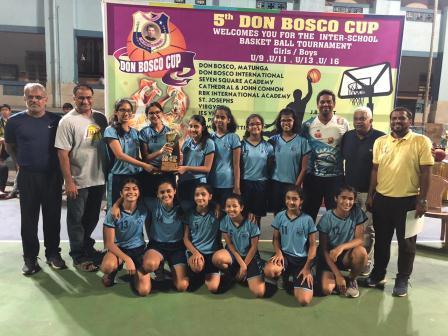 The fifth edition of the Don Bosco Cup inter school basketball tournament had over 20 schools and 90 plus teams from Mumbai, Thane and Vashi participating in the day-night extravaganza. It commenced on Mon 23rd April 2019 and ended with the finals on Sat 27th April. The tournament was open to boys and girls of age groups u-9, u-11, u-13 and u-16. This time around, the tournament was organized by the Savio Club (DB Matunga) with the assistance of our coaches and student volunteers.
It was indeed a good time to be at DB Matunga to relax and watch a good game of basketball. One witnessed yet another display of sheer skill of the talented hoopsters that was met by enthusiastic support of the spectators. The best talent of Mumbai, Thane and Vashi gave much reason for cheer and hope for the future of this sport in the city, state and country.
The tournament drew to a close with the pulsating finals of the u-16 boys group between Billabong school and Shishuvan on 27th April. Prizes were awarded to the three top teams in each category, and the best players among boys and girls. The hosts Don Bosco High School, Matunga and Don Bosco International School, Matunga were among the prize winners. The officials were awarded mementos for their availability to officiate the matches.

Three cheers to the winning teams, the parents and especially the organizers-the DB Matunga Savio Club, the school coaches and the volunteers under the able direction of Fr. Crispino D’Souza! It was professional organization at its best!