Talent can’t be taught but it can be awakened…

Talent can’t be taught but it can be awakened…
Mrs. Sonali Dsilva and Master Aryan Gajula 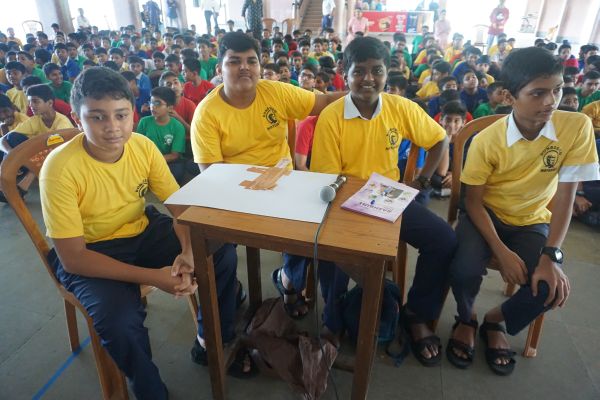 The Bosco Kala Utsav at Don Bosco High School, Matunga was held on 29th August 2019. A day dedicated to exhilarating performances, remarkable photography skills, impressive elocution pieces, a scholarly debate and a slew of other engaging events for the students of the secondary section revived the keen inquisitive and playful mind of every child.
The day began with a calm and serene morning prayer. The day’s program was well planned as the events were spread in the three areas of the school which could accommodate the audience for each event at the Kala Utsav. The first session began with the inter-house Quiz conducted in the Gym area which received an overwhelming response. The students cheered every right answer that contributed to the score of their respective house. Simultaneously, the English Elocution for the students of the ninth standard was conducted in the Conference hall while the junior group showcased their talents in the Talent Hunt Competition.
Post the short break, the students grew excited for the inter-house debate. The students were all ready to takeoff with their debating ability. The statements, counter statements, objections and refutations enriched the debate and provided a constructive touch to the proceedings. It ended with a clear and a justified summary. Spell Bee and Juniors Quiz were the other educative activities at the Utsav.
Additions to this year’s array of events were the Photography and the Mykensho career presentations, where students were given the task to click pictures around the campus on the theme suggested to them. For the MyKensho program, the students presented an idea through a role play on a few careers.”The pictures clicked had a professional touch,” commented Pratik Pallewar, a judge of the photography competition. The hustle and bustle of the school undercroft area provided a melodious break as the senior students crooned melodies during the English and Hindi vocals.
All in all the day ended with a smile on everyone’s faces having experienced satisfaction and pride. The announcement of results made a few jump with joy while others seemed determined to make it to the lucky streak the following year.