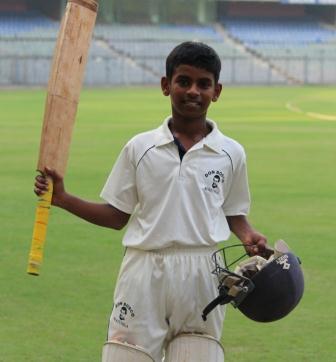 When people throw stones at you, you turn them into milestones
Sachin Tendulkar
The nation suffered a heartbreak as India didn’t make an indelible mark on the British soil during the World Cup 2019. However Sahil Jadhav, our very own ex U-14 School cricket team captain made it to Somerset for an exchange programme initiated by Cricket Beyond Boundaries. Sahil trains with Dilip Vengsarkar Cricket Academy at Churchgate. The all-rounder has 220 runs and 11 wickets to his credit in the five matches he played against various clubs in Somerset, including a century against the Marylebone Cricket Club.
Sahil was a part of the Wells Cathedral School in Somerset. His day began with a stringent practice schedule every day and club matches which were held every week. Sahil said that this programme has enhanced his technical ability and that his basic knowledge of the game has increased. He faced a few challenges in his early days at the Wells Cathedral Hostel as he was not accustomed to the food and the weather.
Sahil says “The cool weather is a hindrance to the game as it is difficult to play as one may feel the chill in the air and make your hands freeze”. Sahil was the youngest player among the others playing in the club. Achieving this feat against his senior counterparts has definitely boosted Sahil’s confidence. The Wells Cathedral School has invited Sahil next year too to become a part of their team. Sahil looks forward to this invitation and making a deeper impact on the game that he so loves!