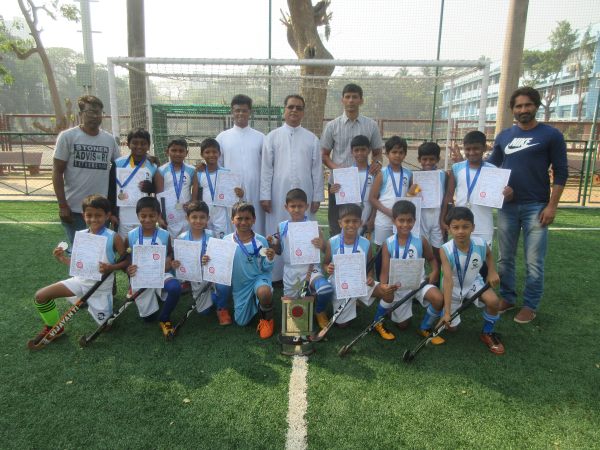 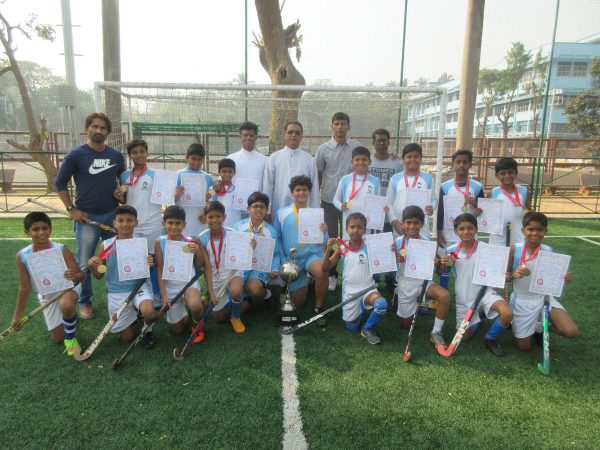 It was yet another story of ‘so near, yet so far’ for our teams in hockey and basketball. While the u-12 hockey A team avenged its defeat in the earlier finals against St. Stanislaus school, Bandra in the MSSA conducted tournament, to retain the late Olympian Walter D’Souza trophy, it was a heartbreak for our u-11 basketball A team and the u-10 hockey A team in finals of their respective tournaments.
Displaying tremendous skill and determination, our school u-12 A team retained the late Olympian Walter D’Souza trophy defeating St. Stanislaus High School, Bandra 2-1 in the finals of the MSSA conducted tournament. The finals were played at St. Stanislaus grounds, Bandra on 20 Feb 2019. In the same tournament our school B team clinched the third place defeating St. Dominic Savio Andheri via the tie-breaker.
In the u-10 category of the MSSA conducted tournament for the Oliver Andrade trophy, the school u-10 A team secured the second place losing 2-0 to St. Stanislaus school, Bandra in the finals played on 18 Feb 2019 at St. Stanislaus grounds, Bandra. The B team secured the 4th place in the same tournament.
In basketball, it was a see-saw battle between two arch rivals and neighbouring institutions. The school u-11 basketball A team lost a close final to St. Joseph’s High School, Wadala in a game of fluctuating fortunes till the final whistle. The boys lost 13-14 in the finals played at Azad Maidan basketball court on 20 Feb 2019.
We congratulate our teams, their coaches and their parents!
Related details on school website donboscomatunga.com (Achievements and Sports sections)