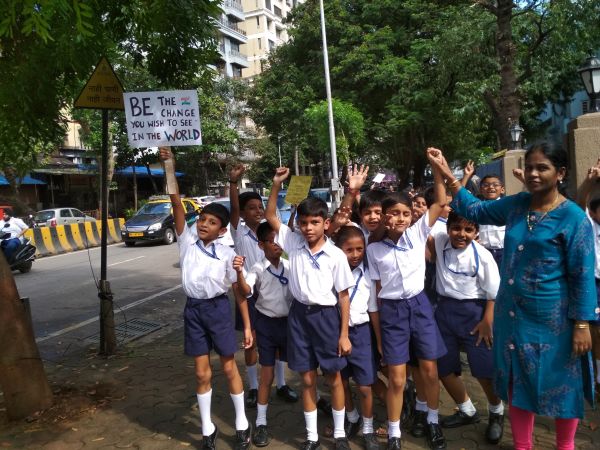 One just bows in reverence at the mention of Mahatma Gandhi. Gandhiji has become an iconic figure for generations of Indians. His unstinted struggle against the British for India`s independence and his undying sacrifice for our country have become memorable. It becomes our responsibility as parents and educators to enlighten our children about the values this noble legend upheld and lived by. On his 150th Birth Anniversary celebrated on October 2, 2019 the students of the Primary Section of Don Bosco Matunga, participated in a social awareness March. This march was conducted as per the directives of the Education department of the BMC. To make an impact, the little ones marched with placards along the periphery of the school building to spread the message against smoking and consumption of tobacco and gutka. Their slogan `Gandhiji Ki Jai` made people notice them and their placards thus hopefully serving the purpose of this drive.
The children were happy and proud to play such an important role in this social awareness campaign.