SCHOOL AS A BULLY FREE ZONE 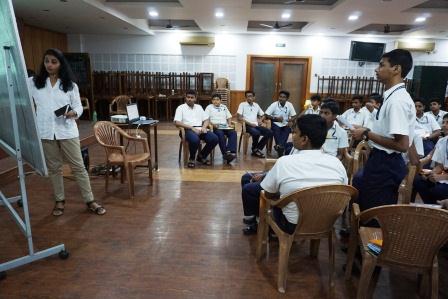 JULY 9:The students of Std. X (beginning with the batches of Std X A) are presently attending a session on growth and development, training the spotlight on bullying, which is on the rise at an alarming rate among school students. The interactive session was animated by Ms. Bindu Chaddha, a professional counsellor placed at Don Bosco International school.
Ms. Chaddha conducted an activity, whereby the students had to qualify their names to describe themselves. She observed at the end of the activity that when we know ourselves so well, why do we need to prove to others our capabilities? She opined that bullying is a distinct challenge among teens and tweens. Bullying among adolescents occurs when one or more of them use physical, emotional or verbal abuse to make life miserable for another.Ms. Chaddha revealed that students who bully are already being bullied by someone. They also crave attention and popularity. There are varied forms of bullying such as physical, emotional, verbal that involves name calling and cyber bullying. A victim of bullying is one who tolerates the bullying and does not report it to authorities who can take action. Students who are bullied are enraged and stressed. The students ruminated on the adverse effects of bullying on the victims during the discourse. There were students in the group that admitted that they indulged in bullying tactics.
Students were introduced to terms such as bystanders and upstanders, which should replace words such as watchers and opposers. She observed, “We are all bystanders who just watch.”. Mridul Chivate of the class said,” I have been an upstander in a quiet way, but the session has emboldened me to speak up and act without being intimidated by the bullies.” Students watched videos on “Stop Bulling.” They also listened to a song on anti-bullying, where a list of dos and don’ts were presented to transform the school into a bully free zone. In the spirited banter that followed after the session, students quizzed each other whether they were bystanders or upstanders.
Ms. Chaddha concluded the session with a thought that parents, school staff and others in the school community can help students prevent bullying by addressing the challenge, and building a safe school environment by creating a community wide bullying prevention strategy.