PTA AGMs of the Secondary section 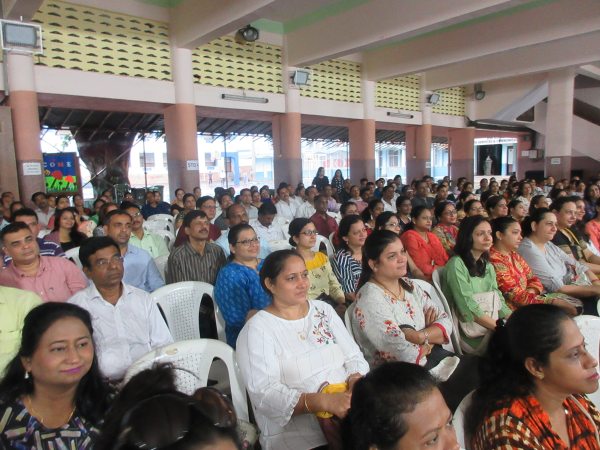 The new academic year 2019-20 began with the General Body PTA meetings of the secondary section held on the 19th, 21st and 24th of June 2019 for standards IX-X, VII-VIII and V-VI respectively. It was attended by the management, staff and the parents. The new members of the management were introduced to the parents-Sir CliffRichard D’Souza appointed as the Vice-Principal for next three years and Fr. Elson Barretto our new administrator. The new AHM Mrs. Christina Mascarenhas was also introduced to the gathering. The initial part of the meeting commenced with Fr. Rector addressing the parents and he elucidated the theme for this year ‘Journeying together in Joy and Holiness.’ The Principal Fr. Bernard Fernandes congratulated the staff and the parents for the outstanding SCC result of the batch 2018-19. He said that it was indeed a commendable result in spite of a 12% dip in the overall pass percentage in the State of Maharashtra. Fr. Bernard spoke about the general rules of the school and the protocol to be followed in situations that may arise and those that need attention from the school authorities. He brought to the notice of the parents the publication of the new policy document that had the different school policies relating to Discipline, Behaviour, Child Protection, Transport, Canteen, Environment, Sports and Admission. Corresponding to each of these will be the monitoring committees having different stakeholder representatives. These policies will be implemented from this academic year.
The Principal then read the various development projects and the maintenance work carried out on the school campus. He mentioned the budget and the expenses incurred on the various projects in the school. The batch of 1968-69 has generously donated 800 LED lights as they complete 50 years as alumni of the institution.
Fr. Elson Barretto, the new administrator was given a warm welcome by the parents. In his address to the assembly, he emphasized on child safety in school and brought to the attention of the parents the various gates (entrances) in the campus that would be used to regulate the flow of traffic (staff, students and visitors) on a daily basis. Next, the AHM, Mrs. Christina explained a few rules which the students ought to follow while in school. The supervisors of their respective sections read the rules for the formation of the PTA executive body.
After the general interaction with the management and the staff in the gym, the parents proceeded to their respective classes of their wards for the election of the class representatives to the PTA executive committee. Some classes elected their representative through vote while others had their representatives elected unanimously. Later, the class teacher communicated a few instructions pertaining to the class. The PTA meetings spread over the few days were instructive and enriching.