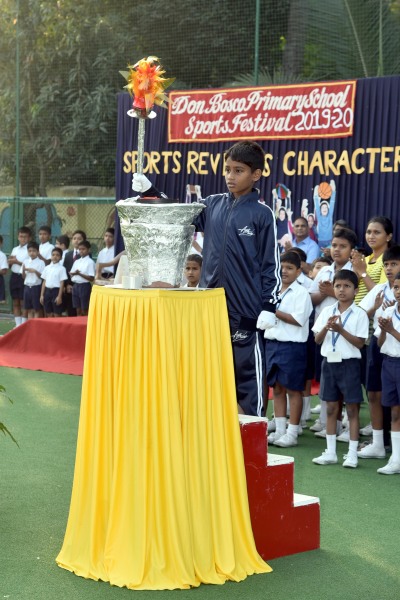 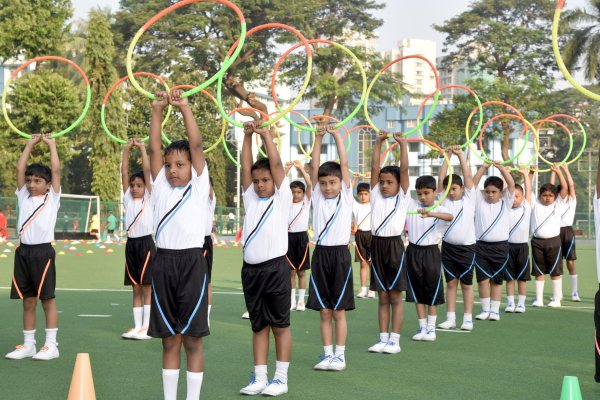 A much awaited day, the Sports Festival of the Primary section of Don Bosco High School, Matunga was held on December7, 2019 on the school grounds. The theme for the Sports Festival this year was ‘Sports Reveals Character’; which complemented the theme of the school for this year, ‘Journeying together in Joy and Holiness’ as sports foster cardinal values like fortitude and tolerance, teaching young athletes to take both victory and defeat in their stride.
One could see teamwork and a healthy sporting spirit among the staff and students on this day. At the formal Opening ceremony held on the magnificent turf it was a proud moment to see the Don Bosco colours being unfurled as the school flag was hoisted and the school anthem was sung. The Lighting of the Torch by the torch bearer, the Sportsman’s Prayer and the Sportsman’s Oath set the tone for the day’s Sporting Events where Participation and not Competition would be the underlying spirit. The Don Bosco School band ranked as the top ten school bands in Maharashtra and India in their regalia escorted our distinguished guests into the sporting arena. Later they gave a splendid performance and had the audience awe-struck and asking for more. Lilting music anda rainbow of colours dotted the grand turf catching the attention of the audience when each standard put up a synchronised drill display. Messages of good health and nature conservation were conveyed well through these wonderful, eye-catching drill displays. The Chief Guest Rev. Fr. Crispino D’Souza in his speech acknowledged and appreciated the work done by the Primary staff consisting of the Head teacher, teaching and non-teaching staff in planning and organising this day. He spoke about the importance of sports in a child`s life and reiterated the fact that sports not only reveals character, it also helps to build it. He declared the Sports festival open.The individual track events had the children racing to the Finishing point often picking up objects on the way as a part of their race. Memories were made on the turf at Don Bosco Matunga when both parents and teachers of the Primary Section took part in games especially organised for them. The team games for the students of each class were well selected by the teachers in co-ordination with the Head Teacher, keeping in mind the abilities of our students. They were an exhibition of team work and skill on the part of our students. The winners were awarded certificates and medals. Each child of the Primary Section participated and got a chance to be appreciated for his efforts.
The solemn Closing Ceremony which saw the School Flag being lowered and the festival being declared closed by our Chief Guest marked the end of a fun filled and exciting day.
The Sports Festival very powerfully brought out the message that true sportsmen believe in playing the game right regardless of winning or losing.