Our parents are our strength – class assembly of std. 10A 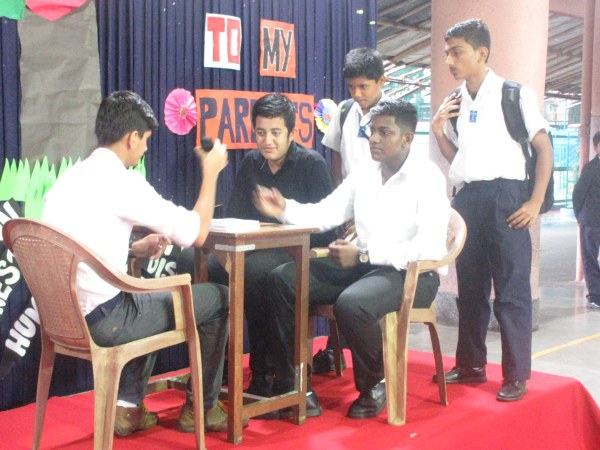 ‘My good deeds bring joy to my parents’ was the theme of the class XA assembly. As we were nearing parents’ day, the class wished to give a message to the audience on respect to our parents.
At the beginning of the assembly, Mrs. Lakshmi conducted the meditation on the theme of the day. Thereafter the class performed a skit that depicted the scene of boys teasing one another by their parent’s names, thus bringing shame and disrepute to them. The skit prompted the audience to reflect on such acts-whether these were acceptable behavior or not. The class further stressed the importance of doing good deeds which would bring smiles and joy to our parents.
The class further had an act on the life of Dr.A. P. J. Abdul Kalam, whose death anniversary falls on the 27th of July. The scenes picked up depicted how a little boy from a poor family dreamt of flying planes. Though he couldn’t become an Air Force pilot, he did become a scientist and later on went to become the 11th President of India. It was possible only through his hard work and dedication. Master Mridul played the role of A. P. J. Abdul Kalam, where he answered the questions put forth to him by the boys of the class.
The Rector Fr. Crispino D’souza and the principal Fr. Bernard Fernandes appreciated the class for reigniting the values due to our parents and for educating the audience on the life of Abdul Kalam. Fr. Crispino said that Abdul Kalam was bought alive by the class of XA.