MSSA u-16 cherished football title back with Bosco’s! 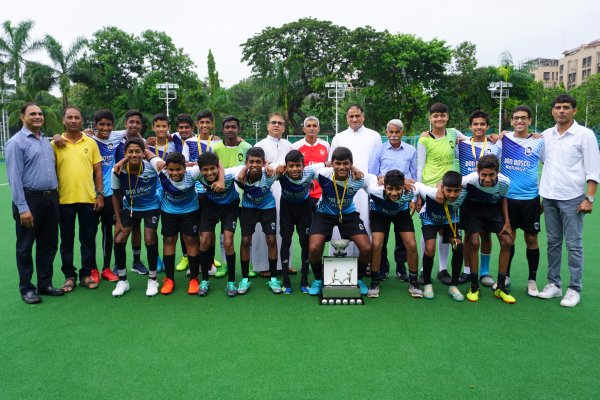 A year was too long a wait for our restless and competitive u-16 football team and their coach Mr. Leslie Machado. Though our u-16 team did win the MSSA organized Ahmed Sailor trophy last scholastic year, the MSSA Division I titled eluded us last year. The title was won back by our brilliant team on Monday 29th July 2019.
Playing an attacking game right through the match-though the players upped the ante in the second half-the team outplayed Bombay Scottish, Mahim, 2-0 to win the title. The match was played at the famed Cooperage stadium that is now fully turfed. In the spectators’ gallery were the members of the school management, Principal Fr. Bernard Fernandes, Vice-Principal Mr Cliffrichard D’Souza, Sports Coordinator Sir Barry, ex Vice-Principal Fr. Roy Noronha, ex-Boscoites and enthusiastic parents. The pleasing and skilful play of our boys won the hearts of the spectators and made them the deserving winners of the day.
It is of significance that our boys outclassed their opponents and won the tournament maintaining a clean sheet without conceding a goal in any of the matches. Our congratulations to the team, the coach Sir Leslie Machado, the management and the parents!