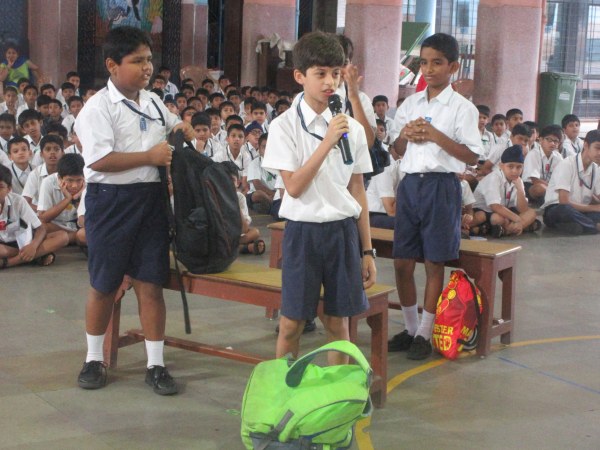 The class 6th B presented their assembly on 17 September 2019 with the theme titled ‘Little Hands Can Create Magic with Love’ which was enacted in a very creative manner as Coffee at Bosco’s.
The assembly began with a relaxing meditation conducted by Sir ShyamPawar. This was followed by a skit. A hot cup of coffee was served to the Rector Father Crispino D’souza, the Principal Father Bernard Fernandes and the administrator Father Elson Barretto.
The skit Coffee at Bosco’s showcased the school life of the famous Bollywood actor Mr Akshay Kumar, a proud alumnus of Don Bosco High School, Matunga. Two messages were brought out through the skit; that is, keeping the classroom clean and helping the soldiers with our monetary contribution. An energetic dance performed by some boys of the class that enthralled the audience.
Father Bernard Fernandes expressed his thoughts as he said, “It was a very creative way of putting across the message to the audience and a well-planned assembly.”
Father Crispino D’souza mentioned three most important qualities of Mr. Akshay Kumar that he noticed when he met him in person; that Mr Akshay Kumar is a thorough gentleman, hard-working and disciplined.
The staff was gifted with a pen having the words ‘Little Hands Can Create Magic with Love’ while the management was presented a mug, pen and a book with a similar note.