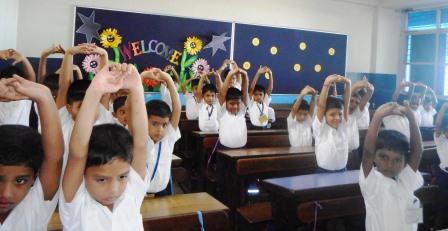 “Keep Calm Do Yoga” is a popular advice given by most people these days.
Yoga is an ancient art which originated in India around six thousand years ago. Earlier people used to practice yoga and meditate daily to live a healthy life. However the practice of yoga was seen to be declining in recent times due to a crowded and hectic schedule. With the commencement of the celebration of International Yoga Day every year, there is a noticeable rise in the interest and support for yoga. The practice of yoga benefits people of all ages and proves to be fruitful.
International Yoga Day is also called as World Yoga Day which is celebrated throughout the world on June 21. The theme for this year is ‘Climate Action.’ In our school, yoga has become an important activity. There are inspiring talks on the importance and benefits of practicing yoga on a regular basis. On 21st June this year, at the yoga day celebrations in school, there was a power point presentation and a documentary video demonstration shown to the boys. Besides this, there was the listing of the various asanas and techniques of breathing. The classrooms and corridors were well decorated with charts depicting the yoga asanas, their various names and some information related to them. It was a very unique and inspirational day for everyone.