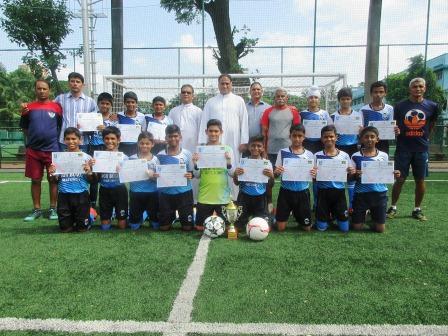 The U-14 football team had set the ball rolling with a 9-win streak in the DSO 1 football tournament in Mumbai. They went on to represent the city of Mumbai (and the zone) at the State level. The boys accompanied by their coach Pillai and a few parents set out for their trip on Sunday, 11th August, 2019 to Washim near Aurangabad. The players were accommodated in a hotel close to the match venue.
The first match was scheduled for 12th August 19, 2019. The Mumbai boys played against their Aurangabad counterparts and won 7-0. The first goal was scored by the center mid-fielder and the team captain, Zarayus Anklesaria, which proved to be a game changer for the team. The very next day our U-14 team played their semi-finals against Pune. The game was petering out towards a goalless draw and a penalty shootout when in the last few seconds of the game, the left winger of St. Vincent’s School, Pune managed to score a goal, and break the hearts and the challenge of our boys. The final score line was 1-0 in favour of Pune. Defender Vignesh Shetty said, “This was the most difficult and disappointing part of our trip as we would now be playing for the 3rd place.”
The boys and the coach though heartbroken at the loss, worked together to change their game plan for the third place. The match against the Nasik team proved to be a crucial one as it was a do or die situation for the Mumbai boys. The team won with a convincing margin 3-0, Cristiano definitely proving his mettle and value for the team by scoring all the three goals.
The u-14 team returned home bagging the third place at the state level and missed out on their trip to Delhi at the Nationals by a whisker. All was not lost though with our boys returning with a wealth of experience to handle greater challenges in the future.