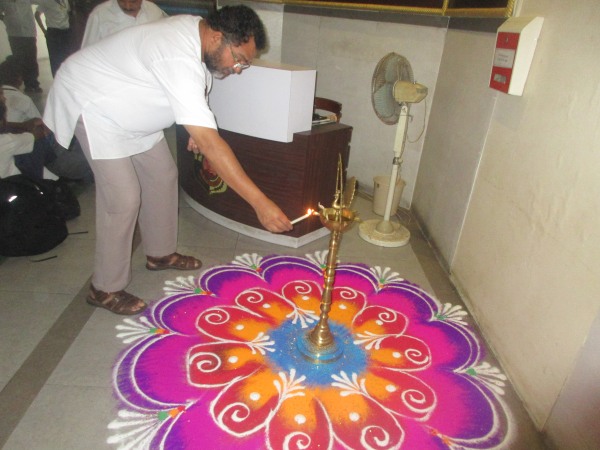 14th September is celebrated as Hindi Diwas which commemorates the adoption of Hindi as the official language of India. In our school, the celebrations began with a symbolic lighting of the lamp by Fr. Elson, our Administator, Mr Clifford, Our Vice-Principal and Mrs Christina, our AHM which was accompanied by recitation of the sholaka. The Deepam was adorned with a beautiful Rangoli at the entrance which signified the light and colour in our lives brought about by a vibrant Hindi language.
Corridors were decorated with charts on prominent authors, their work and short poems were displayed. The talk show over the intercom by the students and Sir Rajesh brought to light the importance of the day and how the Hindi language was adopted in the constituent assembly in 1950. Sir Rajesh spoke about versatile authors, poets, scholars who are well known in the fraternity and he recited a piece named Urvashi by Ramdhari Singh Dinkar. The talk show gave an insight into the significant contribution of the language and its authors.