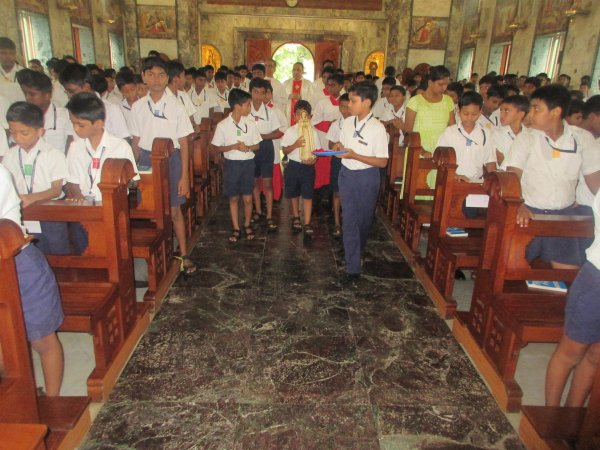 The boys and the teachers of Don Bosco High School, Matunga gathered in the Shrine of Our Lady Help of Christians for the celebration of the feast mass on 11th September, 2019 at 9:15 am. The mass was celebrated on occasion of Mother Mary’s birthday, which was on 8th September,2019.
The main celebrant for the mass was Father Valerian Pereira and the concelebrants were Father Bernard Fernandes, the Principal of the school, and Father Mylin Noronha.
The motivating homily by Fr. Valerian revolved around the theme, “The more we come closer to God, the greater the events that takes place in our lives.” He explained how the Mother of Jesus, lived a Christ-centred life, as revealed in the Canticle of Mary called ‘The Magnificat’. Keeping the classrooms clean and respect for teachers were also the tips given to the students in order to glorify God.
Father Bernard Fernandes thanked the choir conducted by Ms Daphne and Sir Sherone. The well trained choir made the mass meaningful and vibrant. Fr Bernard also thanked Ms Elizabeth for a devout animation of the liturgy.
Alongside mass, a prayer service was also held for staff and students of other faiths in the classrooms over the school intercom on the theme “Honouring Mother Mary and all mothers.” The student council members Swayam, Gurmehar, Ashish, Shivansh and Varun guided by the supervisors Mrs Lakshmi Krishna and Mrs Elizabeth Soares conducted the short prayer service.
This program began with a short prayer for the mothers followed by a song emphasizing the importance and role of a mother in our lives. The prayer service concluded with gratitude for our earthly mothers for all their silent sacrifices and forbearance.
A hymn to Mother Mary was sung with great honour. The service concluded with greetings for the Onam festival, which was celebrated on the same day.