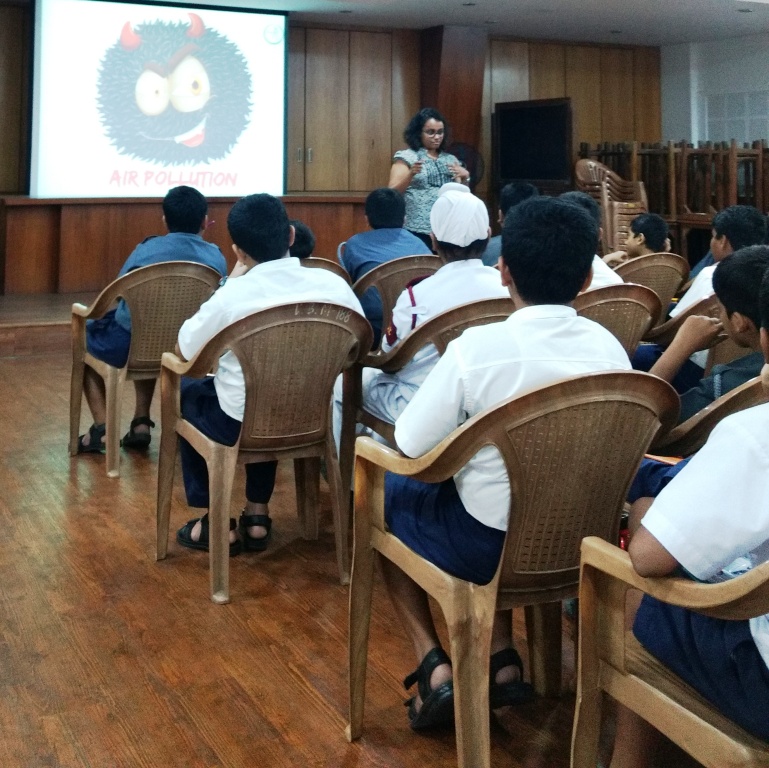 The second seminar under the Green school campaign, in association with the Green Line organization, took place on 17th September, 2019. Ms. Yugandhara joined the seminar along with the Nature Club students of Don Bosco High School, Matunga.
The session began with Ms. Ishani probing the students on different facts related to air pollution, which were discussed in the session conducted earlier. The students were excited to answer the questions. She made the students aware about the effects of air pollution by presenting the statistics of occurrence of air pollution in India. She stated that 13 out of 20 most polluted cities are in India. Sion and Bandra were listed as the most polluted areas of Mumbai in December 2018. The students were asked to state the reasons for the quality of the air being poor and also to opinionate on the cutting of 2646 trees of the Aarey forest for the Aarey metro shed. The students were sensitized through a video, ‘call from the future’, on how the polluted air has affected all the living organisms in the year 2030.
In the second half of the session, Ms. Anushka named various air pollutants and stated their ill effects on the health of all living beings. She mentioned the five bad guys; particulate matter, VOCs, ground level ozone, CO2 and nitrogen and sulphur oxide, fighting against which is necessary. She mentioned that spreading the word, that is, creating awareness amongst the people is the most effective way of reducing air pollution. A survey was also conducted by the Green Line so that the students could learn how to conduct one themselves. It was indeed an informative session.
Ms. Ishani concluded the session by elaborating on the tasks for the months of September, October and November. She encouraged the students to write articles related to nature conservation, with a chance of these being posted on the social media.