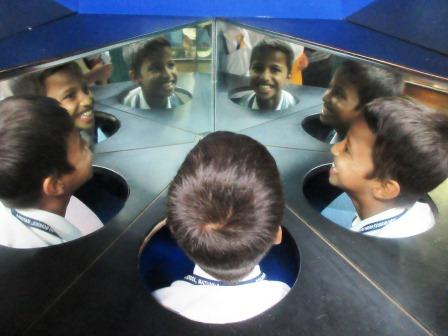 The most awaited field tripto Nehru Science Centre for standard 5 was held on 18th July, 2019. The teachers who accompanied us were Ms. Pauline Vallado, the supervisor for standards 5 and 6 and all the class teachers and the associate teachers of standard 5.
After a 45-minute drive, we reached the venue. First, we were shown a steam engine and a tram. We also saw a steam Lorry used in the olden days. There was a science play park with all science inspired slides and swings, to name a few.
For the first session, we were taken to an auditorium where we were shown the documentary called ‘Aircraft Carrier, Guardians of the Seas.’ We were briefed about aircrafts that were used in the olden days, particularly during the second world war and the ones which are in use now.
The next session was on ‘Science of Sphere.’ It was based on the solar system, which is very much connected to the first chapter in our Geography textbook. There was a huge globe in the centre with three projectors. We were informed about the amazing solar system, Galaxy, the Stars, the Milky way in which our Earth, Sun, Moon and all the other planets are located. We were awestruck when we were told that there are more than four trillion stars in the Milky way galaxy.
We then witnessed the pre-historic life, where dinosaurs and other ancient animals and human models were at display. The climate change, Fun Mirror and Hall of Evolution sections were some of the major attractions at the venue.
Our trip to Nehru Science Centre was indeed a splendid and knowledgeable one. I would like to thank the school management on behalf of 5th standard students for the educative and memorable trip.