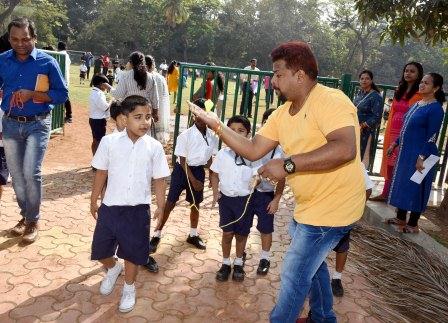 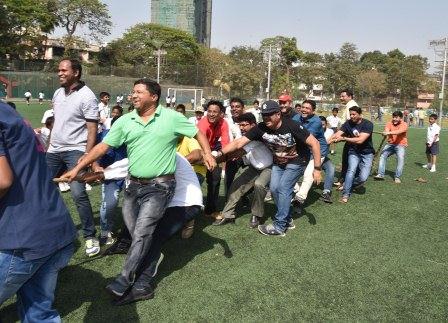 Dads are most ordinary men, turned by love
into heroes adventurous story tellers and singers of song.

A father has the potential to be a powerful force in the life of his son. Recognizing this fact, the Primary section of Don Bosco High School, Matunga, celebrated Father and Son Day, a mega event to deepen, strengthen and cement the special connection that fathers share with their sons. The event was held on 9th March, 2019, in the school gym area and the school grounds. It was celebrated in two sessions-the morning for the daddies of Stds.1 and 2, and the afternoon session for Stds.3 and 4.
All the daddies congregated in the gym where they were warmly welcomed. The ‘day’ began with a meaningful prayer and a foot- tapping song rendered melodiously by the students. After Fr. Principal’s sage advice to all the daddies present to make the most of this day for a similar program is not conducted in the Secondary section, the program began with joyous enthusiasm. The fathers brought along fish cutouts with poignant and affectionate messages written on them saying why they loved their sons. These messages were mounted on a board for all to read. The boys along with their daddies also energetically participated in the fun -filled games thoughtfully organized for them by their class teachers. Joyous cries of the victors rent the air, there was palpable happiness all around. Kishore Salvi, father of Advay Salvi of Std IV C said that he was overwhelmed with emotion and was very happy that he took time out to make it for this day. Pratik Shirkar, class representative of Std II D found this day along with the Grandparents Day organized by Don Bosco Primary School, unique and awesome. ‘The daddies normally do not have sufficient time to be at home, so forget giving sufficient time to the children who need our time to be interacted with. At least today was one such day where we as daddies could spend some quality time with our wards,’ quipped another parent Cyrus Irani. ‘Thanks for making my day a day to remember. Am sure even our kids will have this day etched in their memory as even My Dad comes to school, especially for me.’
The day then culminated with spot prizes being declared. Daddies departed and boys dispersed to their respective classes with a treasure trove of happy memories in their heart.