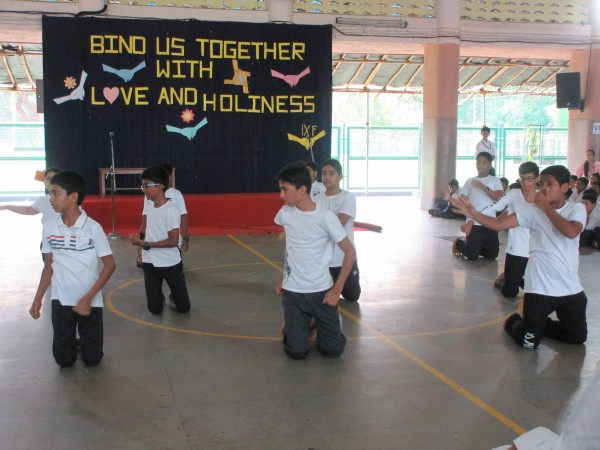 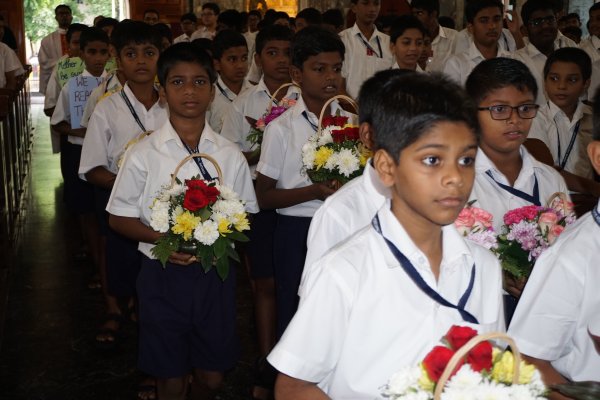 Every year the Salesian schools in India celebrate the feast of St. Dominic Savio on 6th July. This year, on 5th July, 2019, being the first Friday of the month, the Catholic students and the teachers of Don Bosco High School, Matunga and Don Bosco International school gathered with zealous devotion in the Shrine of Don Bosco to celebrate the feast mass in honour of this young saint. Father Vinod Mascarenhas, who also celebrated his birthday, was the main celebrant for the mass. The concelebrants were Father Bernard Fernandes, the principal of the school and Father Mylin Noronha.

The young boys of the school led the procession in the shrine with bouquets of colourful flowers along with banners. Each banner expressed the commitment which the boys chose to follow. The resolutions were, “We wish to attend mass; We will reach out to those in need; We will stay away from media games that are violent; We will dare to correct what is wrong and Mother Mary will be our mother and Jesus will be my best friend.” The choir conducted by Ms. Daphne and Sir Sherone made the mass meaningful and vibrant.
During the homily, Father Vinod Mascarenhas inspired the congregation with his message on the Power of One. To refrain from saying, “what I can do?” but rather choosing to say, “I do what I can.” He asked the congregation to focus on using their strengths than their weaknesses.
A prayer service was also held for staff and students of other faiths in the gym area of the school, on the theme ‘Bind us together with love and holiness’ which was presented with a beautiful backdrop.
The prayer service was anchored by Sachin Subbiah and Mahadev Balla. Mrs Laxmi Krishna, the supervisor led the boys into meditation. The boys of Std 9F also expressed in depth the teachings of different religions on bonding and togetherness. The choir sang the hymn, ‘Bind us together’ that echoed the theme of unity. The feast of Dominic Savio was a call for the students to reflect more closely on the idea of holiness by doing ordinary things in an extraordinary way. The boys then placed their humble petitions before the lord. The prayer dance by the students of the Std 9F touched the hearts of those who witnessed it.
The rector, Father Crispino D’Souza congratulated the class of 9F along with their class teacher Mrs. Sushila Britto for their efforts and exhorted the assembly to follow closely the great ideals of the teenage saint Dominic Savio.