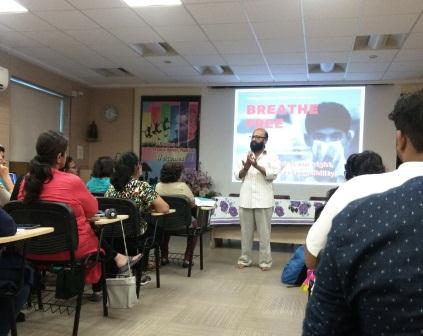 On 3nd July 2019, the orientation program of the green school campaign in association with Green Line for the year 2019-20 was conducted in the Provincial House, Don Bosco, Matunga. Teachers from all schools who work under the green school campaign were invited for this inaugural session.
The teachers were warmly welcomed by Mr. Swanand. He spoke about the green school campaign entering it’s 10th year. He made the teachers familiar with the teen activist, Greta Thunberg- one who has given rise to a global movement against climate crisis. Mr. Swanand then introduced Father Chris Valentino, the newly appointed Director of Green Line campaign.
Fr. Chris introduced the theme for this academic year, Breathe Free. He sensitized the teachers through a documentary on air pollution reaching its peak in India’s capital state, Delhi. And how the polluted air of Delhi is having ill effects on the lives of people currently residing there. The teachers were asked to share their opinions and views on this topic.
The Greenline team had also invited guest speaker, Dr. Ketki Marthak, an ENT specialist. She spoke about the ill effects of air pollution on our anatomy and also how we can prevent air pollution.
In the second half of the session Miss Anushka briefed us on the sessions and tasks that were to be conducted throughout the scholastic year under the green school campaign. She briefed the participants on the procedures to follow the tasks and the criteria on which the schools will be judged.
The session ended with a vote of thanks by Sir Swanand to his team, Dr. Ketki Marthak and the teachers who attended the session.