Being Joyful Together creates Holy Energy

25 August, 2019
Being Joyful Together creates Holy Energy
-Student Reporter(Class 9B) 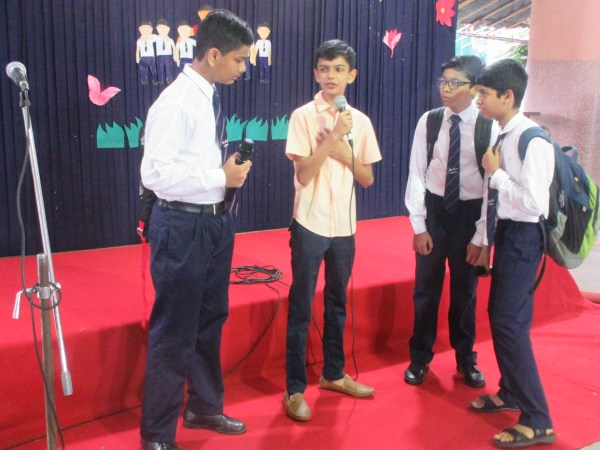 Class 9B along with their class teacher, Sir Rajesh, presented their assembly on the theme, ‘Being Joyful together creates Holy Energy’ on 21st August,2019 in the gym area of Don Bosco High School, Matunga.
The assembly began with a ‘Tandav dance’ indicative of the Shravan season which was beautifully executed by the boys. The dance was followed by a skit prepared by the class on the occasion of their assembly.
The skit was organized into five different scenes where each scene presented a specific message to the audience. The first scene talked about the message on leadership qualities and criteria of being a good leader. The second scene spoke on the importance of being non-judgemental of a person on the basis of his or her physical features. The third scene highlighted that need for one to have the courage to apologise and the decency to forgive. The fourth and the fifth scenes gave the do’s and don’ts of classroom behaviour.
The assembly concluded with a message explaining the difference between a school and a coaching class and how good behaviour in a classroom promotes the good future of a student.
Rector Rev. Fr. Crispino D’Souza appreciated the students and the class teacher for the well prepared assembly while giving his message on the theme. He said, “Optimism looks for the positive in every situation, which should be reflected in thoughts, words, actions and the choices that one undertakes.”
Fr. Bernard Fernandes, the Principal congratulated the boys of class 9B and the class teacher, Sir Rajesh for the well scripted and ably rehearsed assembly.