A grand yet solemn Investiture Ceremony for our school leaders 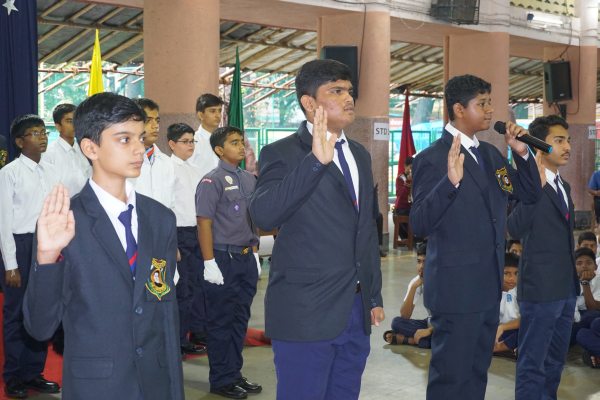 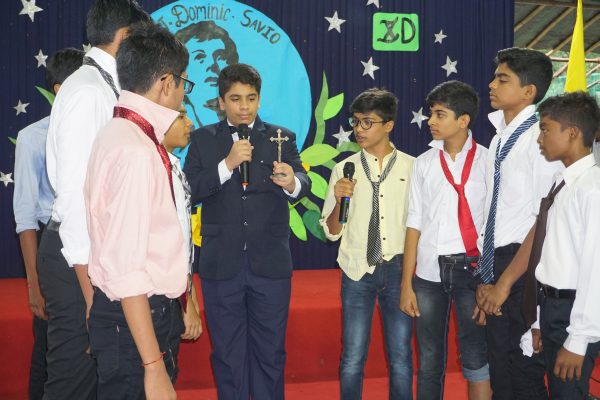 6 July: Leadership is the capacity to translate vision into reality’ avowed the backdrop as the stage was set for investing the student council of Don Bosco High School, Matunga, for the academic year 2019-2020. Having been democratically elected through secret ballot and now eager to take on the mantle of leadership, the boys made a striking picture as they proudly stood ready to commit to their duty.
The members of the management, including the Rector Rev. Fr. Crispino D’Souza, Principal Rev. Fr. Bernard Fernandes, Administrator Rev. Fr. Elson Barretto, Vice Principal Sir Clifford D’Souza, A.H.M. Mrs. Christina Mascarenhas, Coordinator Sir C. Rai, Heads and Supervisors, Mrs. Shoba D’Souza, Mrs. Griselda Fernandes, Mrs. Lakshmi Krishna, Mrs. Elizabeth Soares, Ms. Pauline Vallado, along with the Principal of DBIS Mrs. Meena Saldanha, and sports coordinator DBIS and our past pupil Mr. Edgar Mascarenhas were the special guests for the day. The NCC cadets, giving the dignitaries a guard of honour, led the way to the gym for the ceremony, to the accompaniment of the school band. The lighting of the lamp invoked the Almighty, and Class XD set the mood through their assembly, highlighting moments from the life of the teenage saint and model for the youth, St. Dominic Savio, whose Feast Day is celebrated in Don Bosco institutions on this day.
Ms. Perpetual and her boys made a special prayer to St. Dominic Savio to sanctify the new leaders. The skit portrayed young Dominic’s piety and devotion to God and his eagerness to become holy. We witnessed his fervent prayer to Don Bosco to allow him to enter the oratory, and his journey towards holiness by doing ordinary things in an extraordinary manner. Dominic’s courage and strong will was made evident by the way he mediated in frays and calmly put an end to the warring groups’ rowdiness. It was emphasized that more than sixty years after the virtuous teenager was declared a saint, he continues to be a model of youthful holiness for all young children today. A hymn was sung to St. Dominic Savio, to inspire all youngsters to grow in the love of God. Rev. Fr. Rector addressed the gathering to remind the students of young Dominic’s physical frailty, juxtaposing it with his indomitable courage and unwavering will power that enabled him to do the right thing always. Fr. Rector urged the boys to pray to St. Dominic Savio to be blessed with a strong will so as to stay away from all wrongdoing.
The Student Council for the current academic year was reminded that great leaders are not necessarily those who do great things, but those who lead others to do the greatest things. The Secondary school and Primary section captains, vice captains, sports, discipline and cleanliness leaders, house captains and vice captains, working committee captains and vice captains, the NCC, RSP and Scout leaders were then invested with the symbols of their authority and leadership, and administered their respective oaths, to remind them of their duty to act kindly, listen well and work together as part of a family.
The Principal, Rev. Fr. Bernard Fernandes thanked everyone responsible for the program’s success and encouraged the students to be agents of transformation, who would leave behind a legacy. Fr. Bernard thanked the school heads for inspiring the leaders to give of their best. Fr. Bernard reminded the boys that the monitors and house captains of each class would be installed by their respective class teachers in their own classrooms.
The school captain, Craig D’Cruz gave the vote of thanks, reminding the children that he stood before them not just as a leader, but to work in collaboration with the school for its greater glory.