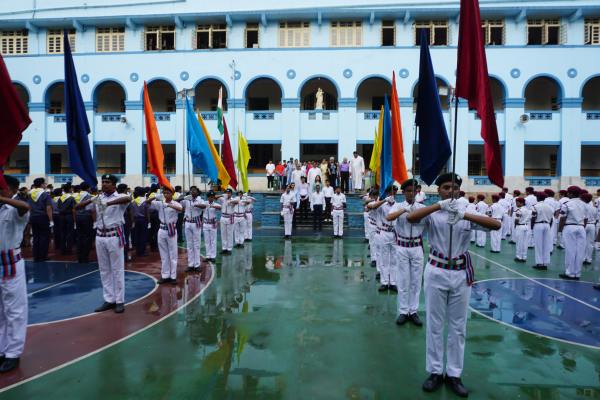 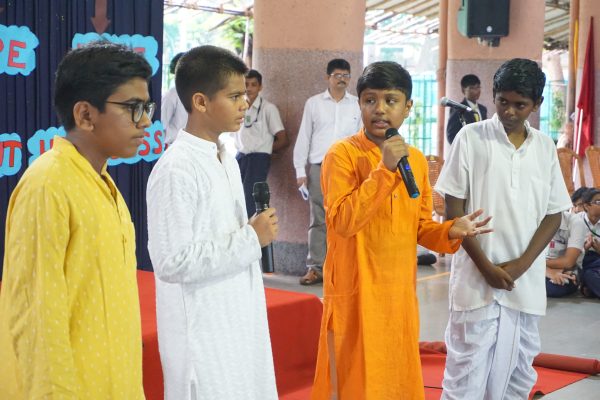 The Indian tricolour was hoisted with reverence and pride, as Don Bosco High School, Matunga commemorated 72 years since the nation’s independence. The chief guests for the day, the parents of our SSC toppers of 2018-19, along with the members of the management, were then escorted by an NCC guard of honour to the gym for the program.
The traditional lighting of the lamp, followed by a felicitation of the chief guests with bouquets of flowers brought us to a thought-provoking and meaningful celebration. Rev. Fr. Rector, Fr. Crispino D’Souza reminded us of a speech by Dr. A.P.J. Abdul Kalam, in which he envisioned an India that would stand up to any country in the world, would no longer consider itself a developing nation and most importantly, an India that would have freedom in its real sense. Fr. Rector asked the audience to contemplate on whether we had succeeded in realizing this dream.
The assembly by class IX A explored the theme ‘Synergy Brings Symphony’ to show how commitment, cooperation, respect, clarity, affection and empowerment bring freedom, love, life, care, hope, happiness, development and harmony. A skit portraying the insidious entry of the British East India Company on Indian soil, ostensibly for the purpose of trading with a new market was followed by the gradual weakening of the Indian economy. This brought to the fore the importance of working synergistically to achieve the common goal. The class also brought to life a few freedom fighters who spoke about their beliefs and hopes and the efforts they had made to rid our motherland of the foreign yoke.
As is tradition at Matunga, the day also saw a felicitation of our meritorious students, with our chief guests awarding them with certificates and scholarships. Mrs. Dhanwani, parent of SSC topper Krish Dhanwani and Mr. Wadekar, parent of SSC topper Atharva Wadekar, respectively shared the hopes and aspirations parents have with respect to their children. Mrs. Dhanwani shared how Krish had been a focused child who planned ahead and was determined to reach his goal. She urged the students to have faith in themselves and she addressed parents too, to urge them to encourage and not to make comparisons with other children. Mr. Wadekar reminded the boys of their only responsibility as students, that of doing their best to make their parents proud. Both parents thanked the school management for their support and encouragement.
The entire school took a Child Rights Protection pledge to empower children to grow in a caring, safe and healthy environment, so as to reach their full potential and contribute towards the progress of the nation.
The Principal, Rev. Fr. Bernard Fernandes, in his vote of thanks gave gratitude to all those involved in making the day’s program a success. Fr. Bernard especially thanked the meritorious students for their presence at the function, which would motivate the class IX and X students to reach for their goals. Fr. Bernard thanked the chief guests for their motivating speeches that came from the heart, one that spoke of a mother’s love and the other, that of a father’s wisdom. Fr. Bernard thanked the SSC boys of 2018-19, for though the overall percentages in the state of Maharashtra and in Mumbai city had taken a substantial dip, our boys had made the school proud with their performance at the public exam. Fr. Bernard also thanked the chief guests for making a mention of the role of the teachers in the boys’ success, as it is always teamwork that brings about success.