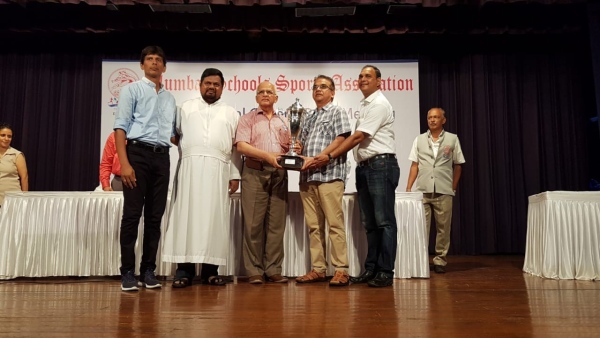 Yet again, our school was awarded the MSSA instituted Best Boys school award in Sports in Mumbai for the best all round performance in sports. The ‘Mr. Niranjan R. Ganjawalla Challenge Trophy for the Best All Round Boys School in Sports’ was received by the Principal Fr. Bernard Fernandes at the award ceremony held at the MSSA 127th Annual General Body meeting held on Wednesday 24 July, 2019 at B.N.Vaidya Hall, IES, Dadar, Mumbai. He was joined on the stage by the Vice-Principal Sir CliffRichard D’Souza and School Sports Coordinator Mr. Barrington Serrao.
As mentioned at the award ceremony, the best school is judged on its performance in different sports tournaments organized by the MSSA. Our school tallied the highest points in the boys’ section for the preceding academic year 2018-19. The awards in the other category were ‘Overall Best girls school’ and ‘Overall best co-educational school’.
We commend the hard work of the school coaches, our players and the parents for bringing home the trophy for a record 16th time since its inception in the academic year 1998-99 by the MSSA.