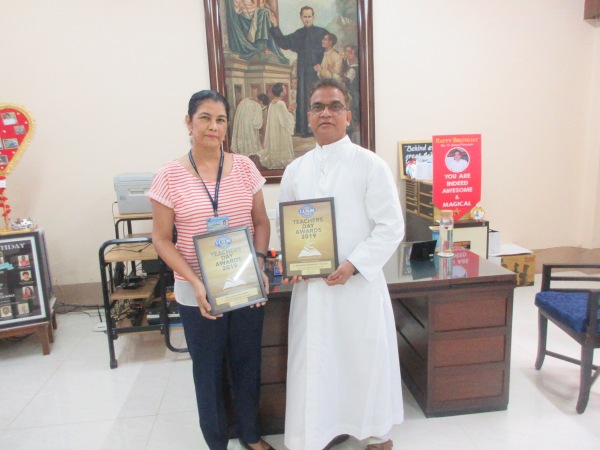 Dressed in finery, teachers walked in at Marriott courtyard accompanied with family or friends for the grand teachers day function by IIHM Pune and the awards ceremony held on 5th Oct 2019. The programme started with a traditional dance by two students of the said institute. It was a very refreshing and interesting classical dance.
The compere of the program, Mr.Amandeep Singh who began his career as a teacher, welcomed the gathering. We were introduced to the chairman of IIHM Dr. Suborno Bose via conference call. The chairman wished us on the occasion of the teacher’s day and said we have professionals and scientists because of teachers as we are the backbone of society. He spoke about food soldiers wherein no one goes hungry and work closely with the UN. He asked all schools to be a part of this revolution (hunger). This campaign is in dire need of support to eradicate hunger. This was their vision and mission.
Mr. Khurana Rupinder Singh IIHM asked teachers to respond to all pupils no matter how silly their queries were. Parents are the first educators and pass on the baton year after year to different teachers. He stressed that a good teacher guides, imbibes good values, responds and reacts.
Mr. Yusuf Lokhandwala IIHM Pune spoke about their TV channel FOODFOOD wherein YOUNG CHEF INDIA visits schools, talks about their programme and have auditions where the best 10 are chosen. If selected in the final round they appear on TV shows. The winner gets cash award and scholarship to specialize in the chosen culinary skill. They travel abroad to work and specialize under foreign chefs. A similar program is conducted for teachers too under Mumbai Teacher chef Competition.
Next was the panel discussion on ways to save the environment that was moderated by Mrs. Minoo Mehta. There were four school principals that were called to be speakers at this panel. Each spoke about doing their bit to help save the environment, make pupils aware of cultural disparity, cultivate respect for others and promote language skills other than their own. Each school was doing whatever they could with resources available, spreading awareness especially relating to the beaches and Aarey forest. They made people accountable through the activities conducted by the students.
Thereafter was the much awaited glamorous teachers’ award ceremony. There was much applause and appreciation every time a teacher went on the stage to receive the award. I, Mrs. Lynnette Remedios received the award for my dedicated service at Don Bosco Matunga for 38 long years. Fr. Bernard Fernandes the Principal of the school too received an award for his contribution through his role as a Principal.
The ceremony ended with a thunderous applause for all winners when called on stage for snaps and cutting of the cake. Every participant was given a cloth bag. We dispersed for high tea after the vote of thanks by Mrs.Sangeeta Bhattacharjee.