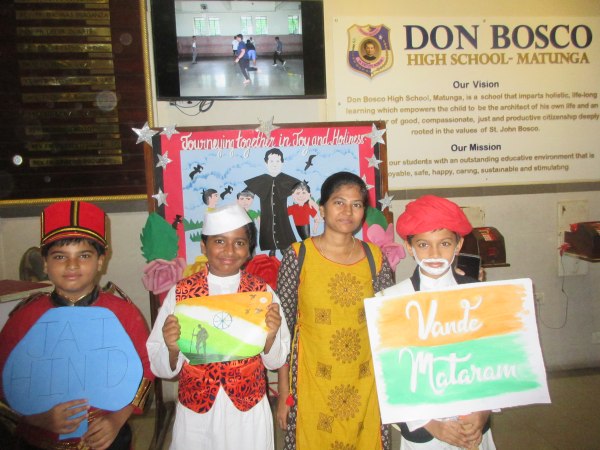 Don Bosco High School, Matunga wore a bright yellow look on 14th August, 2019, as it was Yellow House Day. The day’s celebration was to bring to an end the House week that reflected the theme of the year ‘Journeying together in joy and holiness’.
Prior to the day’s activities, the students and teachers of the yellow house were preparing with great enthusiasm for this day. The students dressed up as freedom fighters were positioned at the entrance to welcome the staff and students at the beginning of the day.
The assembly via the intercom focused on the theme ‘Freedom in Holiness’ that showcased the struggle and achievement of Indian Independence to mark the Independence Day of the country that was to be observed the following day.
The assembly emphasized ‘Holiness’. Master Andre Fernandes introduced the theme at the beginning of the assembly which was followed by a prayer said by Ms Jansi. The assembly was then taken forward by Mrs Bela Mehta, Ms Sushila, Ms Gracy, Ms Snehal and the boys of different classes of the yellow house.They touched on the various dialogues/speeches of our freedom fighters such as Mahatma Gandhi, Pandit Jawaharlal Nehru, Bhagat Singh, Subhash Chandra Bose and Prafulla Chaki. These were interspersed with lively patriotic songs. The key message was that the element of holiness was present in the freedom fighters and their struggle for freedom.